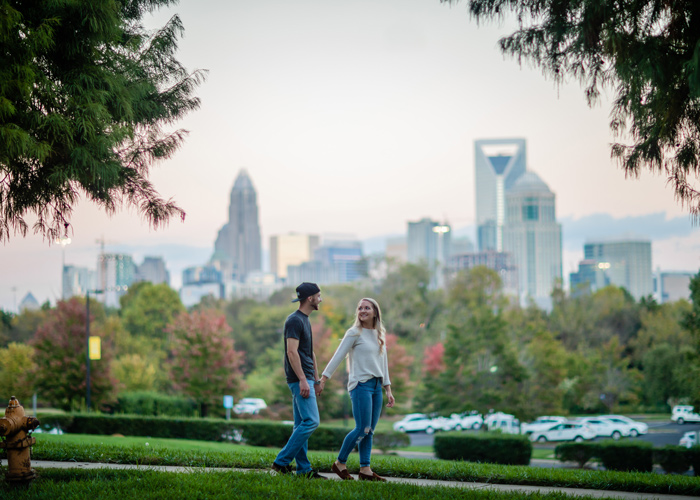 Residents of Charlotte, NC are likely already familiar with its FreeMoreWest (FMW) neighborhood – aptly named for its desirable locale where two main thoroughfares, West Morehead and Freedom, intersect – but unless you’ve been a FMW occupant or frequent visitor as of late, chances are even the most in-the-know Queen City citizen may be surprised by all the area now has to offer. The locale has seen continued growth from new eateries, shops and options for entertainment in recent years, making it Charlotte’s most exciting up-and-coming community with its own unique flavor. And its adjacency to the impressive Bryant Neighborhood Park means residents will enjoy all the perks of urban life in a sprawling, suburban setting. Join us as we take a quick virtual tour through some of FMW’s and the Bryant Park area’s hottest spots.

We’d be remiss to kick things off without a nod to illustrious Bryant Neighborhood Park, an 8.7 acre outdoor oasis nestled in Charlotte’s Historic Camp Greene. Providing a refuge from nearby Uptown and neighboring FMW’s hustle and bustle, the park is noted for its unique network of stone walls and stone seating above its softball fields. A popular spot for both outdoor recreational enthusiasts and those simply seeking to immerse themselves in nature for an afternoon, Bryant Neighborhood Park is a an easily accessible rustic respite on Charlotte’s West Side.

A new mixed-use community has arrived in Charlotte, and it will be adjacent to Bryant Park Terraces. Salt and Vinegar boasts an impressive 74,000 square feet in two buildings that feature one of Charlotte’s three Legion Brewery locations, creative office space and room for retail, there is more than enough to keep you occupied. The playful name comes from Charlotte’s history of snack making generally, as well as the fact that the space was at one point a factory for Mitchum Quality Snacks, who specialized in potato chips.

Somewhat of a local legend in its own right, Pinky’s has been featured multiple times on the popular Food Network program Diners, Drive-Ins and Dives with memorable host Guy Fieri. But if the star appeal isn’t enough to make you curious, the mouth-watering menu featuring classic American fare should be. Known for their famous fried pickles, innovative cocktails, and everchanging “Burger of the Month” menu (December’s burger was aptly named the “BYE! 2020” burger), Pinky’s has grown a cult following amongst locals and tourists, alike.

Named Charlotte Magazine’s Editor’s Choice for Best Yoga for Beginners in 2014, the Yoga For Life studio caters to practitioners of all experience levels as part of their commitment to provide individualized guidance on each student’s personal yoga path. Classes are led by caring and experienced teachers who aim to foster a true sense of community. Like many area businesses, Yoga For Life has had to pivot in the midst of the pandemic and its classes are temporarily being offered virtually via Zoom to ensure the health and safety of students. Meditation, breathwork and mindful movement are never more important than in uncertain times, so the studio has made it simple to navigate virtual classes from its website and looks forward to reopening its doors to clients in 2021.

Rhino put down roots in Charlotte’s West Side in 2014 and they’ve been serving up delicious breakfast burritos, omelettes, deli sandwiches, snacks and a plentiful beer and wine selection to satisfied customers ever since. With an extensive, largely locally-sourced menu that includes vegetarian options, it’s no wonder this fairly recent addition to FMW has already garnered a nearly 5 star rating on both Yelp and TripAdvisor. Adding to its appeal is an attractive outdoor patio space for patrons to enjoy. And its weekly line-up of events means that whatever your non-culinary tastes may be – whether trivia, live music or wine tasting – Rhino offers something to suit your palette.

Situated in West End in a century-old renovated building, Blue Blaze Brewing has eclectic style to spare – never mind its extensive menu of flagship, specialty and seasonal beers. Less than a mile from Uptown Charlotte, the brewery is easily accessible along the Stewart Creek Greenway, either by bike or by foot. Stop by to take a free brewery tour or enjoy a pint of fresh beer, which Blue Blaze proudly brews using locally-sourced ingredients whenever possible.

Whether you’re a barbecue connoisseur or you fancy yourself more of a fried chicken person, Chef Jim Noble has a meal for you. With 25 years of experience under his belt, Noble’s passion and dedication to food are undeniable with each bite, whether you’re having a beef brisket platter at Noble Smoke or a fried chicken sandwich at Bossy Beulah’s next door. While each of these establishments has its own flair, they share a classic southern taste that no meat-lover can resist.

Looking for a place to watch the game, have a drink and let your dog play with other pups? Lucky Dog Bark and Brew has got you covered – with an indoor/outdoor play yard for them and a sports bar for you, it’s the easiest way to make sure both you and your favorite furry friend can both socialize. And don’t worry, there are clean up stations, trained handlers on site at all times and even special areas for smaller pups to make sure that everyone is not only happy but safe. Between that and the other dog services including baths, boarding and day care, it’ll be tough to get your pooch to go anywhere else!

If you’re looking to make this neighborhood your new home, take a look at our newest community, Bryant Park Terraces and contact us to schedule a tour today!